Is New Zealand the best sparkling wine producer in the “New World”? Based on Cuisine’s tastings of sparkling wines over the years it may well be so.

We’ve seen a steady rate of improvement and it hasn’t been limited only to high-priced products. In this tasting, all the five and four-and-a-half star wines were from NZ, and so were 12 out of 19 four star wines – many of which were also Best Buys.

The desire for quality, the improvement in know-how, the maturing of vineyards, and the drive to over-deliver in a competitive environment have all combined to feed an ever-improving range of bubblies that impress Cuisine panellists year-in, year-out. “In the category of sparkling wine, not only is buying local a way of supporting local industry, it is quite simply a smart decision,” said panel chair John Belsham.

Superiority of the classic grape varieties – chardonnay, pinot noir and, to a lesser extent, pinot meunier – used to make the greatest sparkling wines across the world was readily apparent in the tasting. Of the 26 wines to achieve Cuisine ratings of four stars or more, these “Champagne varieties”, alone or in various combinations, were the main components of 22. Additionally, of the wines scoring four-and-a-half and five stars, all were made according to the methode traditionnelle that was once known as the Champagne method. “The methode traditionnelle wines shone brightly,” said panel member Steve Voysey. “They all ticked the complexity, freshness and elegance boxes beautifully.” This labour-intensive process is practised with consummate skill by the fizz-makers of New Zealand.

Exceptions to the varietal story were a mauzac-based Blanquette de Limoux from southern France, a sparkling Alsace wine that blended the classics with pinot blanc, New Zealand’s Lindauer Classic Rosé, which adds a whisper of pinotage to the formula, and two deliciously sweet, floral Asti sparklers from northern Italy. Wines from other grape types were present, but weren’t in the race compared to the classics.

Marlborough continues to be the home of New Zealand sparkling wine, but other fine examples came from Central Otago, Gisborne and Hawke’s Bay. New Zealand looks set to become the southern hemisphere’s finest source of fizz, and that’s something we should all rejoice about, preferably with the popping of a cork. 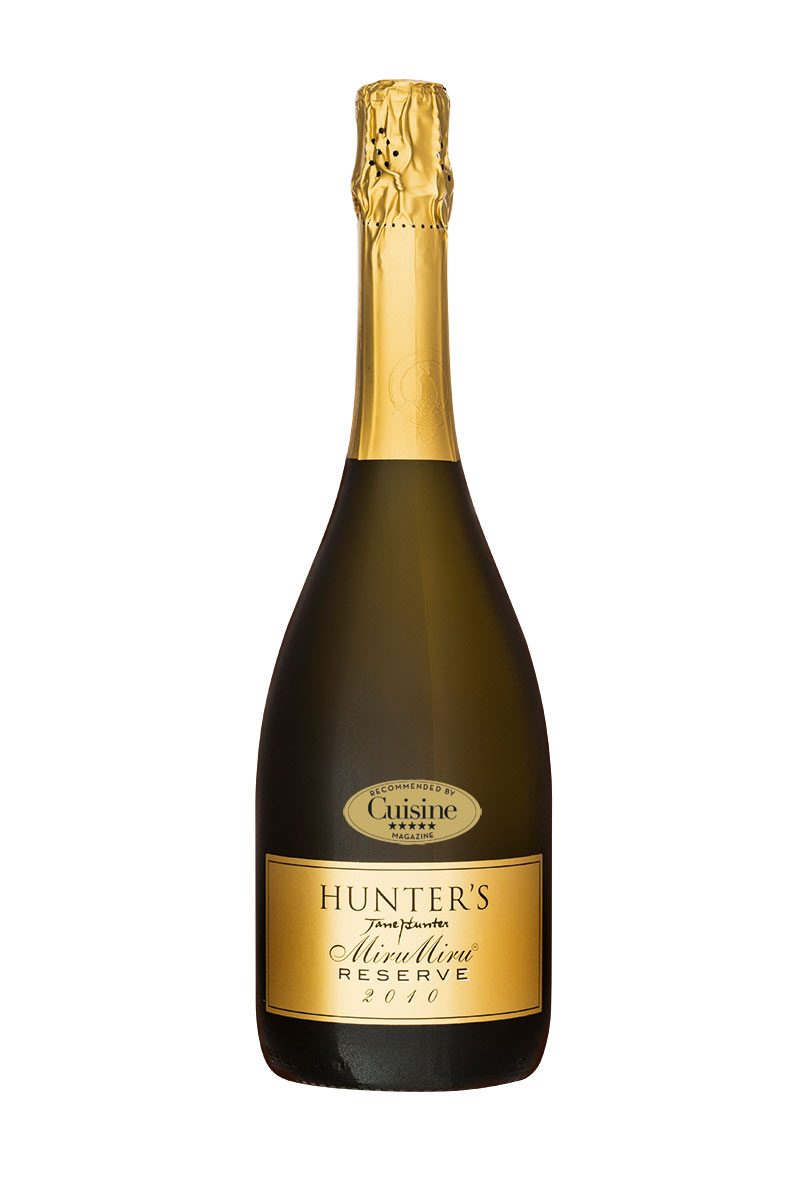 MiruMiru is a stylish, mature style of admirable complexity and genuine flavour intensity. Bready notes and a hint of sulphide add complexity and dimension, introducing a palate that’s flavoursome, yet fresh and light, with good acid balance and grapefruity length. Try it with warm cheese gougères.

Hunter’s MiruMiru has been a consistent favourite of Cuisine sparkling wine panels for many years. It has a longer history in the marketplace than most others too, first being made in the 1980s. Quality has been the prime mover ever since, never more so than under the present winemaking team of James Macdonald and Inus van der Westhuizen. “With the Reserve wine we try to emulate the vintage Champagne style,” says James. ”Even to the extent of using pinot meunier in the blend, a rarity in Marlborough.” The Hunter’s winemakers give credit to Australian consultant Dr. Tony Jordan for much of the rigorous attention to detail that underlines the quality of their sparkling wine. Jordan was instrumental in the successful establishment of Champagne house Moët et Chandon’s outpost in Victoria’s Yarra Valley in the 1980s.